Five exciting variants in the SLR family have been produced – two coupés, two roadster versions and finally the uncompromisingly purist SLR Stirling Moss. This breathtaking, high-speed racer is a limited edition of 75 examples, and is the final chapter in the modern SLR story. Overall 2000 SLR models have been produced – substantially more than any other sports car in this elite category. An SLR also represents a membership ticket to the SLR. CLUB. The spirit of the SLR will live on in this exclusive community of gentleman-drivers even after production ceases. 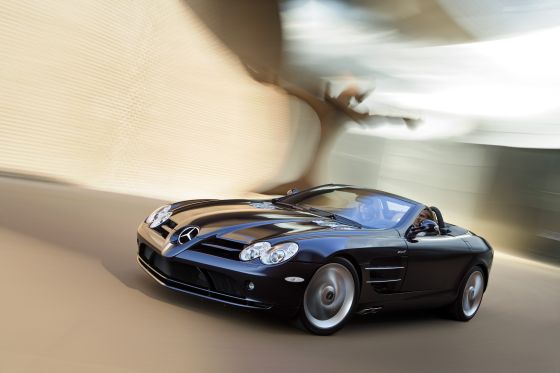 Three letters are all it takes to make car fans go into raptures: SLR. On paper, the legendary name simply stands for “sporty”, “light” and “raceworthy”. But, for connoisseurs, this magical combination of letters designates a dream car of special standing, promising unequalled driving enjoyment – a unique symbiosis of outstanding dynamics, superior performance and exceptional comfort. 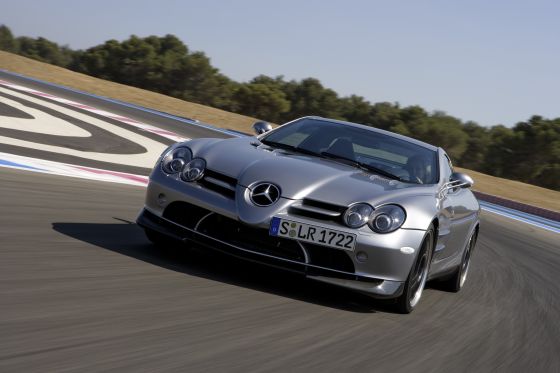 In January 2009 Mercedes-Benz presented the most spectacular and uncompromising version of the reinterpreted 300 SLR as the last model in the SLR family – the SLR Stirling Moss. With neither a roof nor a windscreen to separate the driver and front passenger from nature, allowing them to enjoy sheer high-speed excitement with all the attributes of a speedster. Further attributes of the new Mercedes-Benz SLR McLaren Stirling Moss include highly sophisticated technology and breathtaking design that provides a new take on the SLR legend. A V8 supercharged engine developing 478 kW (650 hp) accelerates the SLR Stirling Moss from zero to 100 km/h in less than 3.5 seconds, and is good for a top speed of 350 km/h – performance that no other standard-production car can match. 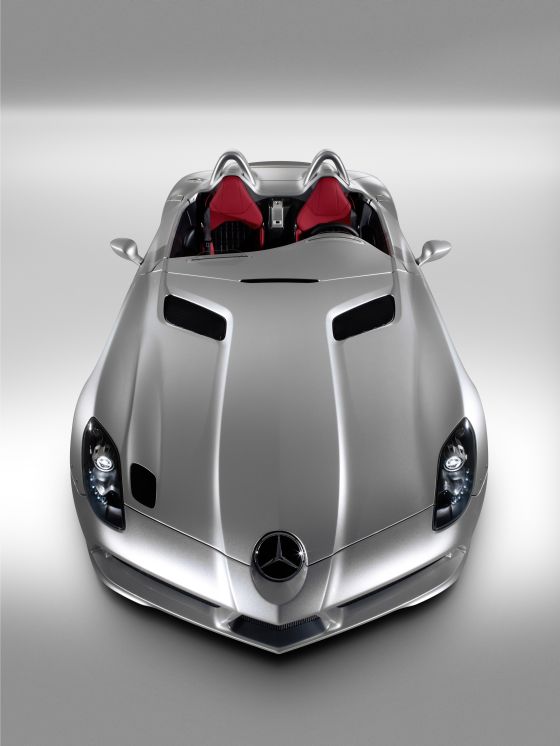 This extreme concept makes the new high-performance sports car a worthy and legitimate bearer of the name of British motor-racing legend Stirling Moss, who piloted the legendary Mercedes-Benz SLR racing cars to a succession of victories in the 1950s.The SLR Stirling Moss accompanied by the 300 SLR and members of the SLR. CLUB celebrated its maiden journey at this year’s Mille Miglia, in the hands of the former Mercedes Formula 1 drivers Mika HÃ¤kkinen and David Coulthard. Sir Stirling Moss himself had even made a return to Brescia to be an eye-witness to this historic event. The SLR Stirling Moss is a limited edition of 75 examples, and production of the SLR series will then cease at the end of 2009.

The SLR spirit lives on

The SLR project was conceived for a limited period, and as a limited edition, from the very start, and is now coming to a magnificent, entirely fitting end with the SLR Stirling Moss. The SLR spirit lives on, however, and will be perpetuated by the enthusiastic members of the SLR. CLUB. In addition to a passion for driving, the members of this exclusive community of gentleman-drivers, all of whom have an SLR model in their garages, share a discerning, sophisticated lifestyle and the enjoyment of encounters with like-minded enthusiasts. The high-quality event calendar of the SLR. CLUB includes driving events on the most demanding race circuits, participation in the Mille Miglia and tours covering the most picturesque routes in Europe. Individual, long-term backup and care at the very highest level for SLR. CLUB members is assured by dedicated Mercedes-Benz personnel well beyond the end of production.

The birth of a legend

The SLR legend was born in 1955, when Rudolf Uhlenhaut, then head of passenger-car testing and in charge of racing-car development at Mercedes-Benz, transformed a fascinating idea into reality. He combined the design and technology of the spectacular Mercedes-Benz 300 SL “Gullwing” model produced since 1954 with the outstanding characteristics of the 300 SLR, one of the most successful racing machines of all time, which at that time dominated all the major road races – above all the notorious Tourist Trophy in Northern Ireland and the two Italian classics: Targa Florio and Mille Miglia. Here Stirling Moss and Dennis Jenkinson piloted the racing Mercedes to victory in a record time that still stands to this very day. But the Brits were not the only ones to achieve success in the Mercedes-Benz 300 SLR. Juan Manuel Fangio, who went on to become Formula-1 World Champion five times, and the speedy Karl Kling drove the sports car from Untertürkheim to many a place on the rostrum.The road-going Coupé version of this legendary racing machine – better known as the “Uhlenhaut Coupé among automotive aficionados – was at the heart of the passionate affection for the SLR held by automotive enthusiasts. 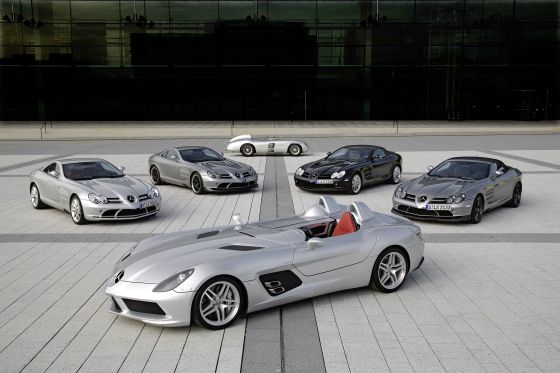 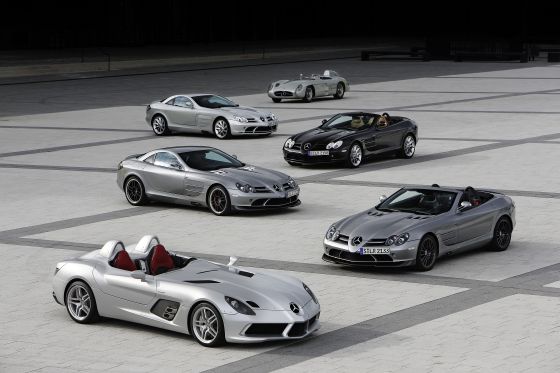 The models in the Mercedes-Benz SLR McLaren family, which have been rolling off the assembly lines at the world championship-winning team’s headquarters in Woking since 2004, are the most emphatic reminders of the glory years of the SLR during the 1950s.

They have brought the core values of the historic SLR models into the modern era – an exciting design featuring many details reminiscent of its predecessors, innovative technology and carefully hand-crafted, high-grade materials. They also continue the tradition of the high-class Gran Turismo models in time-honoured fashion. The Mercedes-Benz SLR McLaren models offer a beguiling mix of optimum handling, extremely high speed and outstanding acceleration, not to mention a wealth of exquisite appointments, all of which makes for a truly unique driving experience.

To keep faith with the traditionally unique standing of the SLR, Mercedes-Benz and McLaren Automotive pooled all of their extensive motor-racing know-how to produce the super sports car. By way of example, the SLR models set the very highest of standards in terms of handling, rigidity and safety for high-performance cars thanks to the extremely widespread use of exceptionally lightweight yet very strong carbon-fibre materials, including the carbon-fibre front structures based on Formula 1 monocoque constructions, which optimise the car’s crashworthiness.

Outstanding powerplant for the front-mid-engine concept

In addition to this, the front-mid-engine concept allows the masses to be concentrated near the centre of the car, which makes for a low mass moment of inertia and consequently exceptional agility and handling dynamics. This concept, together with a chassis configuration born on the racetrack, forms the basis for optimum handling and peerless driving enjoyment.Here an important part is also played by the powerful high-tech engine with motor-racing genes, which was developed at Mercedes-AMG and provides power in abundance. In the Coupé and Roadster models, the driver can call upon 460 kW (626 hp) from the eight-cylinder powerplant with a displacement of 5.5 litres, while the “722” models develop 478 kW (650 hp), ranking the SLR engines among the most powerful units for road-going production sports cars.

The design of the SLR high-performance sports cars generates sheer excitement by virtue of the stretched bonnet, taut waistline, rear-set passenger cell and short rear end of the Coupé and Roadster – making the thrill of high-speed performance visible as well. Features born on the racetrack include the downforce-enhancing aerodynamic concept incorporating a diffuser, an enclosed underbody, a spoiler and the AIRBRAKE.

As for the interior of the Mercedes-Benz SLR McLaren models, the designers have created a synthesis of puristic sports-car feeling and extraordinary luxury. Exquisite materials such as carbon fibre, aluminium and leather developed exclusively for the SLR are of the highest quality and exclusivity. They dominate the passenger area of the Gran Turismo and further emphasise the unique nature of the car.

ESSEN MOTOR SHOW 2013 Will Inflame the Passion for Classic Cars