The 35-year-old rapper, actor and mogul, who was most recently ranked third on Billboard Magazine’s “Artist of the Decade List,” says the Mustang is one of the hottest muscle cars ever to hit the streets. 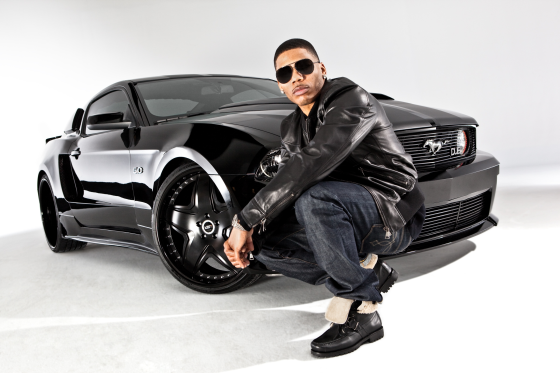 “I don’t care where you grew up, everyone knows the Mustang. At some point, you’ve had a conversation about a Mustang – and it was probably one about you wanting to get behind the wheel of one,” says Nelly. “I’ve always loved the Mustang; the vehicle has power to the point where you can’t help but want to hit the pedal. And the newest one? More power, hotter style.” 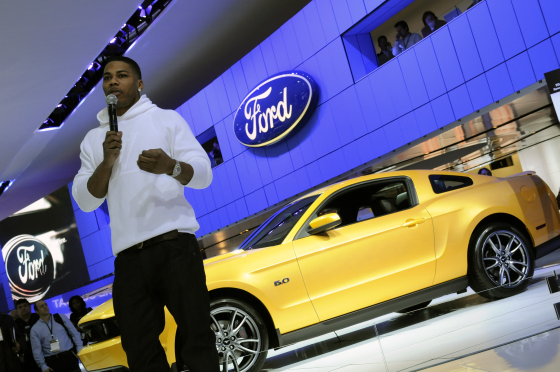 Nelly’s tricked-out Mustang GT came to life after the artist caught a glimpse of the vehicle while inside the walls of Ford’s design studio a little more than a year ago as part of a partnership tied to the launch of the 2009 Ford Flex. Since then, Nelly has collaborated with Ford’s design team and DUB’s customization team to make the Mustang his own while still keeping the vehicle true to its muscle car roots.

Crystal Worthem, Ford’s Multicultural Marketing communications manager, says Nelly is an amazing partner for Ford: Nelly has an impressive history within the entertainment world, just as the Mustang has a strong history within the automotive world.

“Nelly is a true car guy, there’s no denying that. When Nelly expressed interest in wanting to partner with Ford on the all-new 2011 Ford Mustang GT, we knew it was a perfect fit,” said Worthem.

“The Mustang has such appeal within the urban market. Since it was launched, the vehicle has made appearances in several of the most popular urban films,” Worthem added. “This was just a great opportunity for Ford, and we’re excited that the Mustang GT is going to be a part of one of the most anticipated albums of 2010.”

In addition, the interior is a complete suede and leather design with a custom JL Audio system that includes two 12-inch subwoofers, amps and speakers.

Nelly says he can’t wait to hit the streets in his 2011 Mustang GT.

“I’m itching to get behind the wheel of my Mustang and really take it out on the streets. This vehicle being a part of my album artwork is just a reflection of the direction and feel that the album has. To be able to partner with Ford again on another vehicle that is going to change the automotive game is exciting,” said Nelly.

The 2011 Ford Mustang GT arrives with an all-new advanced 5.0-liter V-8 engine, developed by a passionate cadre of engineers who rallied around the common goal of delivering more than 400 horsepower.

The modern 5.0-liter four-valve Twin Independent Variable Camshaft Timing (Ti-VCT) V-8 engine in the new Mustang GT will deliver 412 horsepower and 390 ft.-lb. of torque. At the same time, fuel economy is projected to be better than the previous model and unsurpassed in the segment.

From the 5.0 fender badges to the new engine cover, Mustang GT honors and continues the proud heritage of its predecessors. The speedometer increases to 160 mph and the tachometer redline advances from 6,500 to 7,000 rpm.