Body style offerings remain unchanged with the availability of Roadster and Coupe models along with the ACR (American Club Racer) package. Approximately 500 vehicles will be built for the 2010 model year.

With the introduction of two new exterior colors – Toxic Orange Pearl Coat and Bright Silver Metallic Clear Coat – Dodge Viper SRT10 is now available in 12 different colors – the most regularly available choices in one model year. And with six stripe options in the new wider configuration, five different interior color combinations, four different wheel choices and three available interior bezels; the 2010 Viper SRT10 will be available in more than 7,600 combinations – the most for any one model year – significantly adding to the exclusivity of each car like never before. 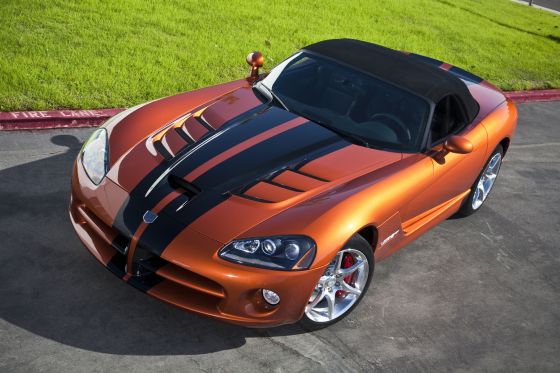 New across the Viper lineup is a shorter fifth gear ratio (changing from 0.74 to 0.80) for improved high-speed acceleration and higher straightaway speeds. Acceleration from 0-200 mph has improved by 14 seconds. This improvement is a direct result of the Chrysler Group LLC Street and Racing Technology team’s experience at the 12.9-mile Nürburgring Nordschleife circuit in Germany where during the lap-record run in 2008, it was found that a revised gear ratio would have resulted in higher top gear acceleration and a quicker lap time.

Stopping power is another carefully developed part of the Viper SRT10 equation, with 14-inch brake rotors gripped by Brembo 44/40 dual-opposing piston calipers in the front and Brembo 42/38 dual-opposing calipers in the rear. This system results in world-class braking performance of 60-0 mph in less than 100 feet.

The Dodge Viper SRT10 ACR receives a new short-throw shifter in 2010 for enhanced driver experience and better performance. The rear wing profile and end plates are redesigned to further optimize the vehicle aerodynamics and improve rear yaw downforce. These changes combined with the new fifth gear ratio result in an increased top speed of 4 mph (to 184 mph for the ACR model).

The aerodynamic package features a carbon fiber â€œfangedâ€ splitter in front and adjustable carbon-fiber wing with seven-position stanchions that allow up to an amazing 1,000 lbs. of downforce at 150 mph. Lightweight wheels, two-piece slotted StopTech brake rotors and Michelin PS Cup tires round out the Dodge Viper ACR package.

Numerous special, limited-edition models are planned for the 2010 model year, including the Dodge Viper ACR 1:33 Edition, which will pay tribute to the new production car lap record set on Nov. 24 at Laguna Seca raceway. The unique two-tone Black Clear Coat/Red Clear Coat exterior color scheme on this model is the opposite form of the original Viper ACR. Interior highlights include piano black console bezels with red gauge highlights complemented with red accent stitching in the seats. Only 33 cars will be produced as 1:33 Edition Viper ACR models.

The 2010 Vooodoo-edition Viper ACR will feature an all Black Clear Coat exterior with a Graphite Driver’s Stripe outlined in red. Only 10 cars will be produced with the unique striping on both the exterior, as well as on the steering wheel.