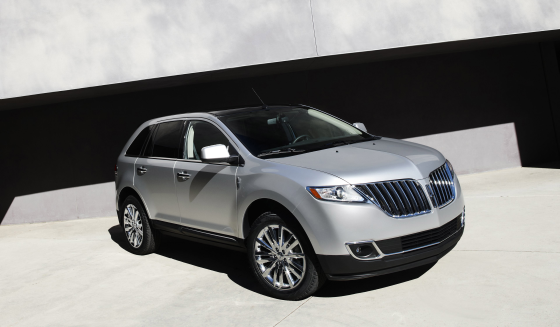 The split-wing grille that distinguishes Lincoln leads off the extensive MKX freshening. Its unique execution creates a layering effect to the front end, adding texture and depth as the hood’s subtle indentations create a sculpted, modern feel. Bright accents are added to the lower door moldings, executed in a tapered style to add a sense of flow and energy to the side view.

The lamps of the 2011 Lincoln MKX are precisely executed with more brightwork. Attention to detail is apparent within the chrome bezel, which appears to float within the black housing and contains separate compartments for the headlamp and the secondary lens for turning. The available adaptive high-intensity discharge (HID) lamps rotate according to speed and steering inputs to allow greater visibility around turns. The auxiliary lamp bezel likewise is a more flowing and sculpted bright piece that integrates and complements the lower fascia opening.

Updates to the rear of the Lincoln MKX also reflect a greater emphasis on upscale style and innovation. The lamps are now two distinct pieces that employ an indirect LED (light-emitting diode) system that hides the light source while allowing the light intensity to shine through. Reverse sensors of the Blind Spot Information System (BLIS®) are integrated into the reflectors while the Lincoln star sits proudly on a new appliqué. Finally, the 4-inch oval exhaust tips, significantly larger on the 2011 Lincoln MKX, increase the unique luxury crossover’s presence as well.

The new 18- and 20-inch wheels are more dynamic and expressive. Instead of a familiar linear or blocky appearance, the wheels instead encompass a variety of undulating and complex shapes that help the 2011 Lincoln MKX appear always in motion. The vibrant wheel shapes again underscore the enhanced feel of craftsmanship and attention to detail found throughout.

“The 2011 Lincoln MKX is brimming with segment-first technology and Lincoln signature design and style,” said Ha. “Technology that people need is perfectly embedded within the styling that customers want.”