Soaring sales of the Ford Fusion have made 2009 already a record-breaking year for America’s most fuel-efficient midsize sedan. Sales for 2009 already have reached 151,137 units, eclipsing the previous Fusion full-year sales high of 149,552 in 2007. Importantly, Fusion sales are selling well at a time when industry sales are the lowest they have been since the early ’80s. “It’s extraordinary that a car could set a sales record in an environment where overall industry sales are down 26 percent from a year ago,” Ford sales analyst George Pipas said. In the first ten months of 2009, Fusion sales were 15 percent higher than a year ago.  Also, Fusion has moved among America’s Top 10 selling vehicles and the No. 1 selling domestic car.

The 2010 Fusion and Fusion Hybrid are the most fuel-efficient sedans in America. The new models offer more power, class-exclusive technologies, such as Blind Spot Information System (BLIS) and Ford SYNC. According to Fusion Marketing Manager Jonathan Richards, the diversity of the 2010 Fusion lineup is drawing a growing number of customers to the brand.

“Fusion Hybrid, Sport and SEL models account for 50 percent of sales,” said Richards.”Data also show that customers are embracing technology offerings such as voice-activated navigation, SYNC and Sony Audio.” Sales of the new Fusion Hybrid account for almost 20 percent of total Fusion retail sales.  Perhaps even more significant, more than 60 percent of Fusion Hybrid sales have been to customers coming from import brands. 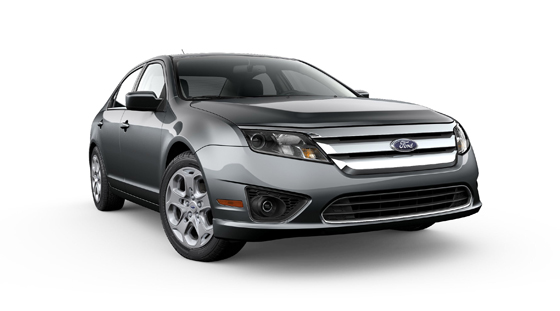 The Fusion Hybrid delivers an EPA estimated 41 mpg rating in the city and 36 mpg on the highway. It also offers innovative new technology – SmartGauge with EcoGuide –  that coaches hybrid drivers to maximize fuel efficiency. According to early 2010 survey data obtained in the 2009 U.S. Global Quality Research System (GQRS), the 2010 Fusion Hybrid has the highest customer satisfaction ratings of any Ford vehicle ever.  The survey was conducted for Ford Motor Company by RDA Group of Bloomfield Hills, Mich.