The 563-horsepower Mercedes-Benz SLS AMG supercar, the fuel-sipping E350 BlueTEC and the fuel-cell-powered F-Cell will be making their North American debuts at the 2009 Los Angeles Auto Show, open to the public December 4-13 at the Los Angeles Convention Center. Mercedes-Benz will also launch its first hybrid SUV — the ML450 HYBRID — as well as the impressive SPLITVIEW dual-content viewing technology. 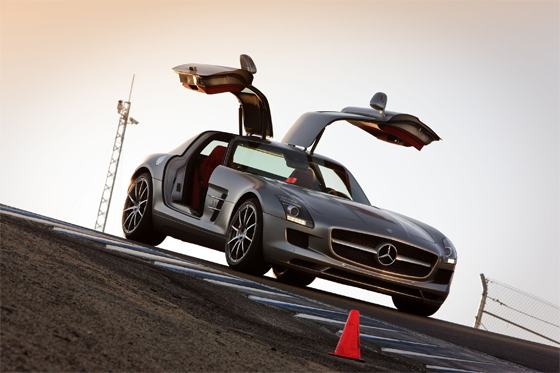 The first-ever car designed and developed from the ground up by Mercedes-AMG, the new SLS AMG supercar features a lightweight aluminum space-frame body with gullwing doors and a 563-horsepower dry-sump V8 engine. With its front-mid engine and dual-clutch seven-speed, the compelling SLS AMG boasts ideal weight distribution and race-car-like handling.

Essentially an electric car that makes its own power on board, the new Mercedes-Benz F-Cell will make its North American debut at the L.A. Show. The F-Cell car has a range of about 240 miles and, running on compressed hydrogen, boasts an equivalent fuel mileage of 86.6 city-highway combined miles per gallon. In 2010, 200 production F-Cell cars will be delivered to customers in the U.S. and Europe as part of a special lease program.

Sharing center stage with the F-Cell and the SLS AMG, the fuel-sipping E350 BlueTEC is powered by a 3.0-liter V6 diesel with 210 horsepower, an impressive 400 lb.-ft. of torque and approximately 30 percent better fuel economy than a comparable gasoline engine. Now with revolutionary AdBlue injection that makes diesel exhaust super-clean, the E350 BlueTEC will be available in all 50 states in Spring 2010.

Making its West Coast debut at the L.A. Auto Show, the Mercedes-Benz ML450 HYBRID uses a 3.5-liter V6 gasoline engine, two electric motors and sophisticated electronics to produce more than 46 percent better fuel economy than a comparable V8-powered ML550 model. Integrated within the modified automatic transmission, each magneto-electric motor is dedicated to a specific purpose — one for pulling away under electric power, the other specifically for acceleration. With both electric motors, the ML450 HYBRID has a total system performance of 335 horsepower and 381 pound-feet of torque.

Added value for the G-Class