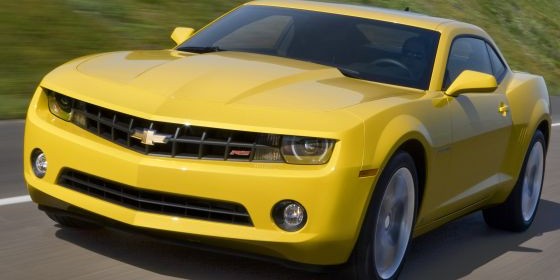 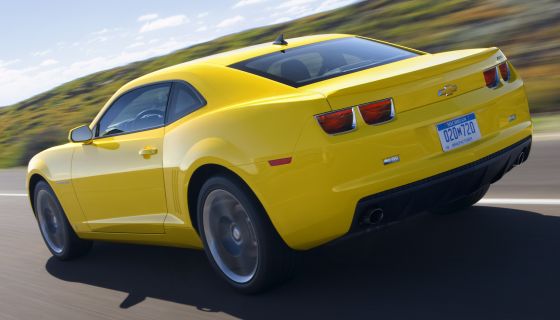 Built on the new global rear-wheel-drive passenger car platform, Camaro embodies GMâ€™s global vehicle development and design process. The original design concept was conceived in the United States, with engineering shared by both Australia and U.S. teams. Validation was conducted on roads throughout the world and assembly is handled by GMâ€™s awardâ€“winning plant in Oshawa, Ontario, Canada.

The long hood and short deck are pushed to the far corners of the muscular fender forms and a fast, 67-degree rake windshield contributes to aerodynamic performance that includes a 0.37 coefficient of drag (Cd) on V-6 models and a slightly sleeker 0.35 Cd on the V-8-powered SS model. 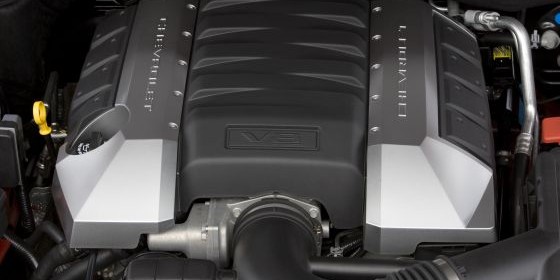 Wheel arch openings received special attention through the design process. Whether the Camaro is equipped with the standard 18-inch, or optional 19-inch or 20-inch wheels, the relationship of the top of the tire and bottom of the fender is consistent on all models. All models also feature the classic â€œVâ€ design motif in the nose, along with a 2.5-inch (63.5 mm) power dome in the aluminum hood, reminiscent of high-performance Camaro models. On SS models, a simulated air intake is located in the upper front fascia and the lower air intake is larger.

On the top, designers took a cue from Corvette and sculpted twin cockpits across the roof, giving the vehicle a distinctive Chevrolet presence. From the outside, the B-pillar is invisible to the eye, lending the true appearance of a hardtop coupe. The B-pillar is designed to provide increased structural rigidity to the car. And to ensure quality in the manufacturing process, a one-piece body stamping provides a cleaner overall side appearance that is free of seams, gaps or plastic appliquÃ©s. â€œGillsâ€ located in the front of the rear quarter panel also are familiar Camaro styling cues.

An RS appearance package is available on LT and SS. It includes HID headlamps with integrated halo rings, a rear spoiler on LT, specific taillamps and 20-inch wheels with a Midnight Silver finish. 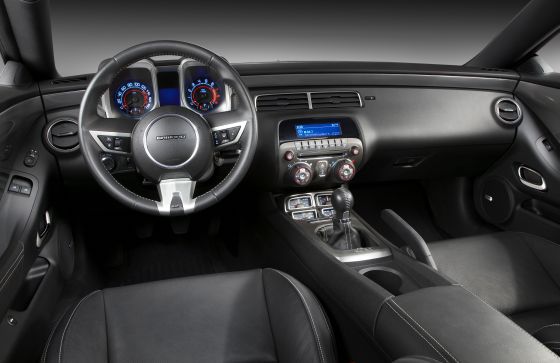 Not perfect: More sporty would have been better (Image: GM)

Inside the four-passenger cabin, a well-executed balance of heritage, modern design and attention to detail conveys simplicity and refinement with contemporary details in the cluster, switches, dials and lighting. An available ambient light package, for example, offers advanced LED light pipe technology, giving the cabin a distinctive glow.

Deep, recessed gauges, located in square housings outlined in chrome, give a nod to the classic Camaro interior. The instrument panel gauges include both speedometer and engine rpm, with a driver information center located between the large gauges â€“ its readouts and features controlled via a stalk on the steering column. An optional, console-mounted gauge package includes oil pressure, oil temperature, volts and transmission fluid temperature. The gauge package is included on 2LT and 2SS models.

Cloth upholstery is standard and leather-appointed seats are included on 2LT and 2SS models. Four-way manual adjustment including fore/aft and up/down on the driver seat and two-way adjustment on the passenger seat is standard. Heated, leather-trimmed seats with driver six-way power adjustment are optional.

Both LT and SS standard cloth and available leather interior colors are black, gray and beige. The front seat travel is a generous 8.5 inches (216 mm) from front to back. On SS models, the seats feature a distinctive SS logo on the headrest with contrasting stitching. An Inferno Orange interior trim package also will be available with leather interiors.

All models include a three-spoke steering wheel with manual tilt/telescope adjustment. Cruise control and rear defog also are standard, while a leather-wrapped steering wheel and shift knob; redundant steering wheel controls; Bluetooth and USB port are part of the available Driver Convenience and Connectivity package. Also included in the package is remote start on automatic transmission-equipped vehicles, as well as a personal device interface module for iPods.

Soon after production begins, customers will be able to order a short-throw Hurst shifter that provides quick, concise shifting.

All models also include power door locks and express up and down driver and passenger window. Cargo capacity can be increased with the standard fold-down rear seat. The capacity of the trunk is 11.3 cubic feet (320 liters). 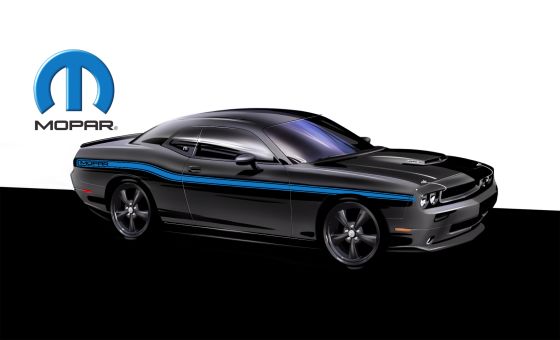