Ford Motor Company created a truly one-of-a-kind vehicle, the Mustang AV-X10 â€œDearborn Doll,â€ to be sold at auction during the Experimental Aircraft Association (EAA) 2009 AirVenture Oshkosh, the worldâ€™s greatest aviation celebration. Ford is the exclusive automotive partner with EAA AirVenture Oshkosh and all of the proceeds from the sale will benefit the Young Eagles organization. EAA AirVenture Oshkosh will be held from July 27 to Aug. 2 at Wittman Regional Airport in Oshkosh, Wisconsin.

The name Mustang AV-X10 is trademarked by Ford Motor Company and symbolizes an AirVenture Xperimental project vehicle based on a 2010 Ford Mustang The â€œ10â€ designation represents the model year of the Mustang, plus the 10-millionth engine from the Romeo Engine Plant. The one-of-a-kind, fully-customized vehicle was created by a dedicated Ford team, including Mustang Chief Designer Darrell Behmer, Design Manager George Saridakis and Mustang Chief Nameplate Engineer Dave Pericak, and Senior Designers Robert Gelardi and Garen Nicoghosian. The sale of the AV-X10 will highlight an evening of festivities at the EAA Gathering of Eagles at AirVenture on July 30.

The group that will directly benefit from the auction proceeds is EAAâ€™s Young Eagles, which has provided free introductory flights to nearly 1.3 million young people since 1992 while also teaching the value of hard work, personal responsibility and enhanced math and science skills.

â€œFord Motor Company has been a committed partner of EAA throughout the years and especially during AirVenture, where Fordâ€™s support has brought value to those who make â€˜Oshkoshâ€™ the pinnacle of their aviation year,â€ said Tom Poberezny, EAA chairman and president. â€œThe generous creation of such specialty vehicles allows EAA to provide support to its valuable programs and dedicated members inspiring young people and building the future of flight.â€

In 2008, a specially built one-of-a-kind Mustang named AV8R raised a record $500,000 for Young Eagles. â€œAlthough it will be hard to top the AV8R, the Ford team is committed to delivering another extraordinary vehicle of interest for all enthusiasts and collectors for EAAâ€™s Gathering of Eagles,â€ said Edsel B Ford II, a member of Fordâ€™s Board of Directors.

The Mustang AV-X10 “Dearborn Doll” is Build #1 of 1 and will be a collectorâ€™s dream vehicle. The AV-X10 is based on a 2010 Mustang GT with the glass roof option. From there the car takes on its one-of-a-kind personality. Ford Racing performance modifications (Supercharger, Handling Pack, tuned exhaust, and exhaust tips) help generate 550-horsepower from the aluminum block 4.6L 24-valve engine. The special racing Handling Pack optimizes the performance experience and lowers the ride height by 1-inch. 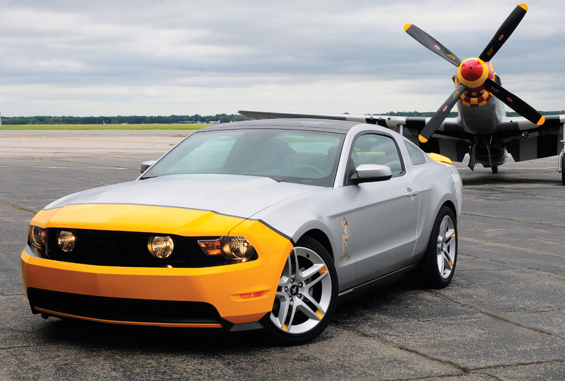 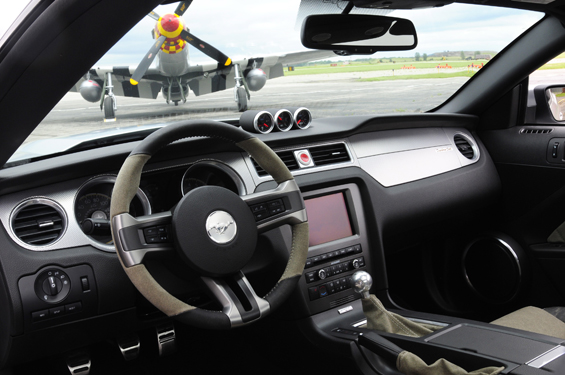 Much easierier than in the plane: the cockpit of the Mustang (Image: Ford) 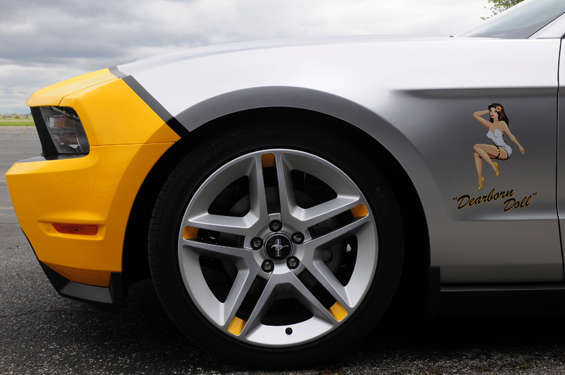 Enhancing the value and allure of the vehicle, the Mustang AV-X10 “Dearborn Doll” will also feature autographs from aviation legends and celebrities attending EAA AirVenture, which could include Harrison Ford, Edsel B. Ford II, Jack Roush, Carroll Shelby, and others. The vehicle will be on display at the Ford Hangar at EAA AirVenture Oshkosh beginning July 27.

Additionally, Ford and EAA will give AirVenture attendees the chance to win a 2010 Mustang GT convertible and other cash prizes in a raffle, with proceeds benefiting the EAA Young Eagles program.

During EAA AirVenture, Ford will also be providing opportunities to ride in vehicles which span the past century and point to the future direction of Ford vehicles. AirVenture attendees can ride in one of several Model T’s on site with members of the Model T Ford Club of America as well as participate in the 2011 Ford Fiesta Movement demo drive. Visitors to the Ford Hangar, in the heart of the EAA AirVenture campus, will be invited to experience the new 2010 Ford F-150 Raptor through an exciting simulator experience and test out Fordâ€™s latest features and technologies. Numerous interactive exhibits will also be available to demonstrate the latest Ford â€œSmart,â€ â€œQuality,â€ â€œGreen,â€ and â€œSafeâ€ innovations. More than 50 vehicles will be on display combined with numerous activities to engage and educate visitors of all ages.